Enigmatic and enchanting, Myanmar, formerly known as Burma, is often referred to as the Golden Land. Myanmar’s long-term isolation has bequeathed a corner of Southeast Asia full of traditional culture, spirituality and old-world charm. Here you can experience a culture which emphasises spirituality and reveres monks and holy men.

Situated on the banks of the Irrawaddy River, the 42-square-kilometre plain of Bagan is the largest area of Buddhist temples and ancient religious ruins in the world. These date from as early as the 11th and 12th centuries.

In Yangon, once known as Rangoon, you can stroll along tree-shaded avenues and marvel at golden stupas and glittering pagodas. A walk around downtown Yangon reveals the spectacular Shwedagon Pagoda, along with impressive colonial era architecture. In Mandalay, offer alms and food to the monks and novices from the Mahagandayon Monastery before visiting the hundreds of peaceful stupas on Sagaing Hill.

Journey to colonial hill stations set amongst rolling pine-clad hills. Drift around Inle Lake with its stilt house villages. and feel the power of a Buddhist relic at Kyaiktiyo, where a huge golden stupa perches precariously on the edge of a hill. 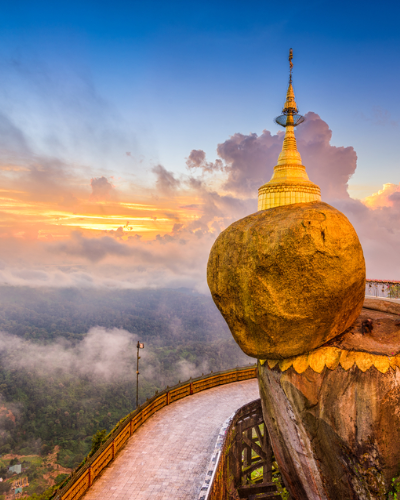 Inle lake is a must-see destination, where you can go wild for adventure. Get memorable experiences such as learning to row with one leg like the famous Intha fishermen.

ICS Myanmar is a part of ICS Travel Group, a leading Destination Management Company that has been offering a premium line of products and services for over 25 years. Their extraordinary journeys feature authentic, hand-crafted experiences, unique luxury and boutique resorts.