What Singapore lacks in size it more than makes up for in culture, street life, futuristic skyscrapers, luxury hotels, elegant temples and grand colonial buildings. This tiny island state measures just 50 kilometres from east to west and 27 kilometres from north to south.

Although its history stretches back thousands of years, modern Singapore was founded in 1819 when the British governor, Sir Stamford Raffles, landed in Singapore and established it as a trading post for the British East India Company.

Today, Marina Bay Sands, with the world’s longest rooftop infinity pool, is one of the city’s most recognised and photographed landmarks. There are gardens galore in this green metropolis. The Botanic Gardens is the world’s only tropical garden declared an UNESCO World Heritage Site; while the lush landscapes of Gardens by the Bay have earned numerous awards and accolades.

Yet Singapore’s legacy and history still lives on. Explore street markets and breathe in the aromatic spices of street food in Chinatown and Little India. Explore the bars and boutiques in the converted warehouses overlooking the river in Clarke Quay. In the colonial district wander past heritage buildings and museums – not forgetting to stop for a famous Singapore Sling in the grand old Raffles Hotel! 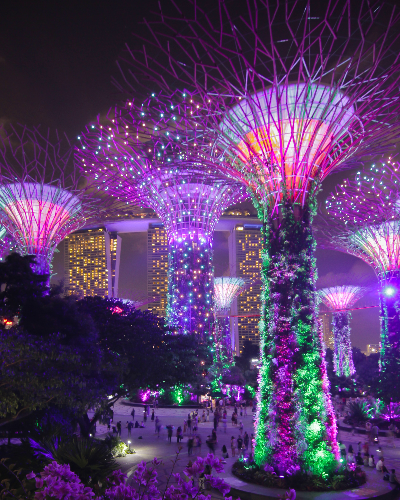 Early evening take a walk along the river passing through Robertson Quay, Clarke Quay and Boat Quay. Stop for a happy hour drink  in one of the many bars overlooking the river, then sample delicious street food and hawker fare at Raffles Quay.

Pioneers in the field of destination management, World Express is a full service, integrated travel organisation specialising in the handling of individual and group travel.

Since the founding in 1969, World Express has provided the highest levels of destination management services in Singapore. They operate three divisions : Leisure, MICE and Cruises.

The company’s forte lies in customising and delivering experiences that cater exclusively to your needs and interests.

Find out more about World Express