The Story Behind – The Racha

by Mary EdenSustainability, Thailand, The Story Behind

The Story Behind – The Racha

At The Racha, a luxury hotel situated on Racha Yai, a small island south of Phuket, luxury doesn’t come at a price for the environment.

Singaporean Daniel Lim, Managing Director of The Racha, takes sustainability seriously and lives by the mantra; ‘when you take care of Nature, Nature takes care of you’. 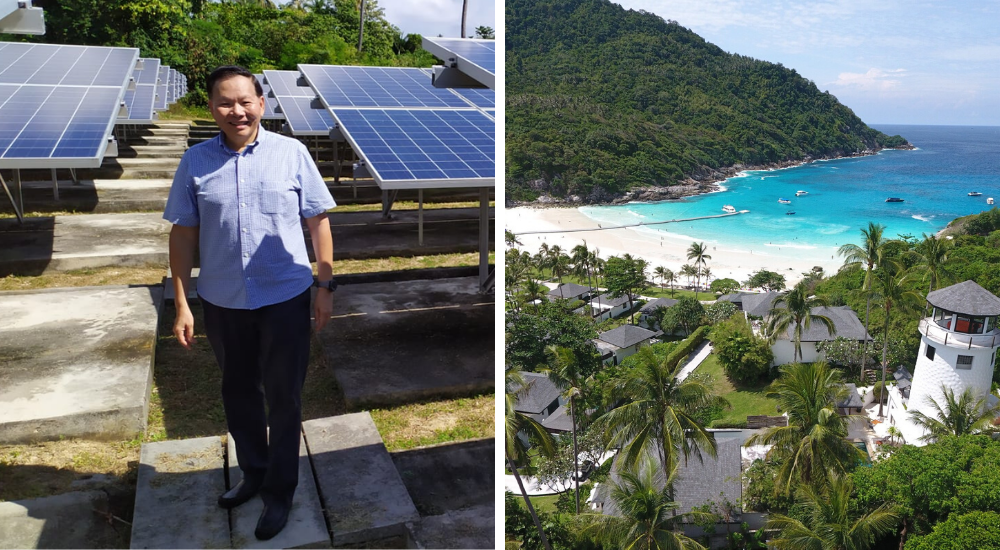 Can you tell me a little more about you and how you became involved with The Racha?

I had been visiting Phuket and the surrounding islands for over 30 years before I decided to invest in developing a resort on Racha Island. But in terms of environmental sustainability I knew we had to do it right – or don’t do it at all!

And we did do it right! In 2004, when The Racha opened, Conde Nast Travel added us to their Top 100 Hottest New Resorts in the World. As a result, the resort was fully booked when the Asian Tsunami hit. Incredibly, all our guests and staff were safe despite the devastation. However the resort had to close for one whole year to rebuild.

We’re incredibly proud of what we’ve achieved over the years with regards to sustainability. The Racha is an EarthCheck certified property and is audited annually by EarthCheck to ensure full compliance with the strict environmental sustainability requirements. In addition, in 2018, The Racha received the Gold Award in the Ministry of Environment’s Green Hotels and Resorts Program. 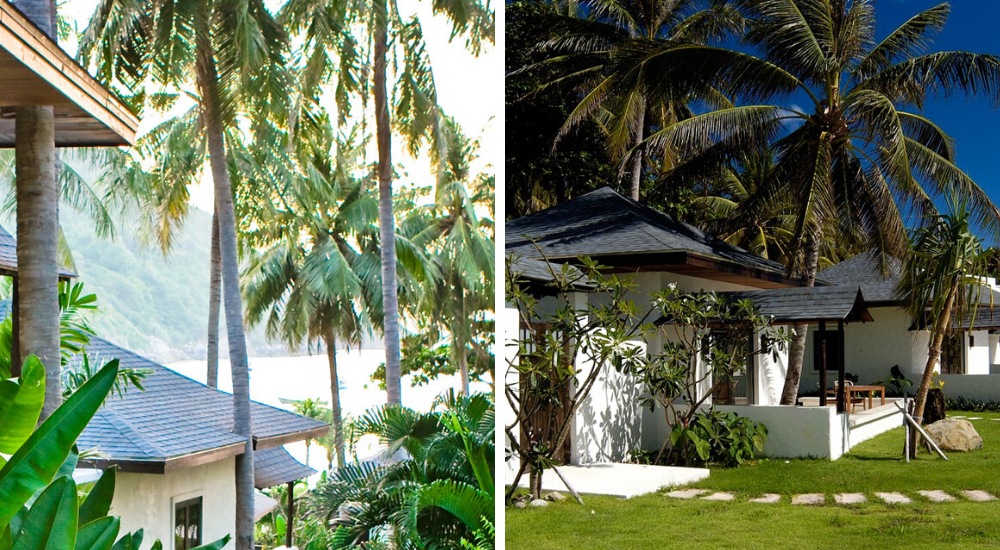 The Racha is incredibly green and lush, how did you preserve the natural surroundings when building the resort?

We had two concerns when designing The Racha: minimising the impact of rainwater run-off; and not damaging the natural landscape and terrain of the site.

Rainwater run-off into the sea and the subsequent damage to the coral reef ecology was a real concern. We created surface drains throughout the resort to channel the rainwater through various ponds and tanks into an absorption pond in the centre of the island. The absorbed rainwater replenishes the island’s natural ground ‘water-bank’.

During the building of the resort, we cut down only seven trees and in fact, many of the original trees can be seen coming through our buildings and roofs. For every tree that was cut, we planted more than two to replace them. One of the pool villas was completely redesigned to accommodate huge boulders which otherwise would have had to be removed. 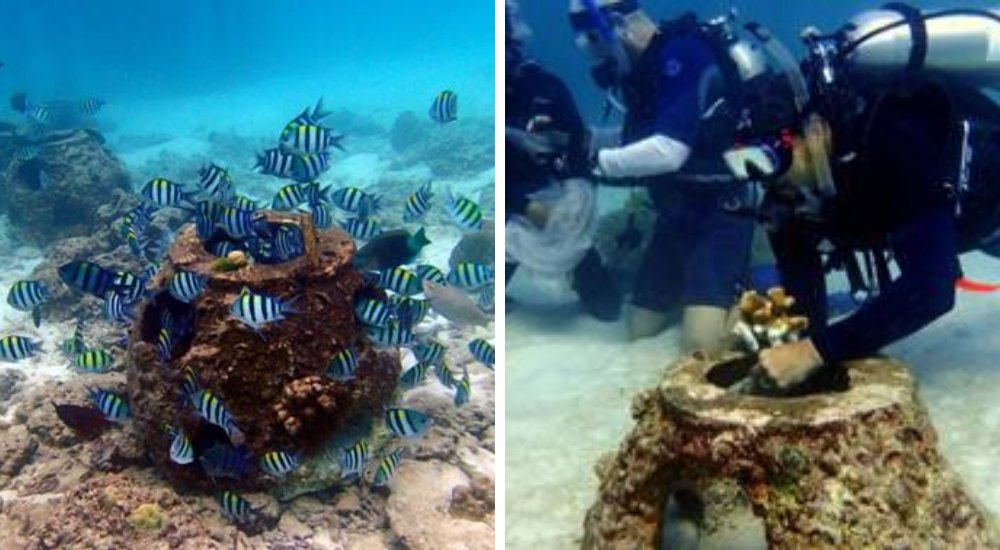 The Tsunami caused massive damage to the shallow water reefs, how did you help to revive them?

We’d already been working together with the Reef Ball Foundation – a US-based NGO that builds, restores and protects coral reefs by using ‘Reef Ball reefs’. We wanted to use the Reef Balls to give Mother Nature ‘a hand’ by creating additional coral reefs so as to lessen the pressures of daily dive tourism on the island’s natural reefs.

After the tsunami, we sponsored two million Thai Baht to put together a major coral reef rehabilitation project together with the Reef Ball Foundation. Thirty marine biologists from all over the world spent a month at The Racha in early 2005 helping to build 250 reef balls onto which the damaged corals were transplanted. The coral rehabilitation project was presented to and approved by the Prime Minister at the time, Thaksin Shinawatra, and the Minister of Environment & Natural Resources.

In 2015, the Reef Ball Foundation re-evaluated the placement of the Reef Balls. It was discovered that some were being sandblasted by migrating sand displaced by the 2004 tsunami. Thanks to the outstanding effort of volunteers and the Racha dive centre staff, approximately 50 Reef Balls were relocated. The entire operation took just three days. In their new home, the Reef Balls still provide habitat – and now also provide a surface on which rescued corals colonies can be transplanted.

Tell us about the night of the stranded whales?

During a monsoon storm on the evening of 26 June 2008, about 50 False Killer Whales started beaching in the bay directly in front of The Racha. We tried repeatedly to move the whales into deeper water but the whales kept coming back. A marine biologist informed us that the whales were in a heightened state of anxiety and disoriented – and that we should try to calm them down.

Due to the pounding of the waves this was impossible. I decided we should carry the whales across the island to a calmer bay. Using a large stretcher, our tractor and Caterpillar backhoe, we lifted 12 of the largest whales, one by one to Ter Bay.

Along with our clinic’s nurse and marine biologists from Phuket we sedated the whales and baby-sat them in the water for over an hour before finally releasing them just after midnight. To everyone’s surprise, after we did this, the other whales went back to deep water. Sadly we had one fatality – one whale which was stranded on the rocks and died before we could rescue it.

Could you tell me about your waste management system and how you treat waste water and reuse rain water?

The Racha subscribes to the 3 R’s of waste management – Reduce, Reuse and Recycle.

Our bio-gas system converts food waste into bio-gas which is then used for cooking in our staff kitchen. We convert wood and plant waste (branches, coconuts, etc), into charcoal which is re-used in our seafood BBQ. 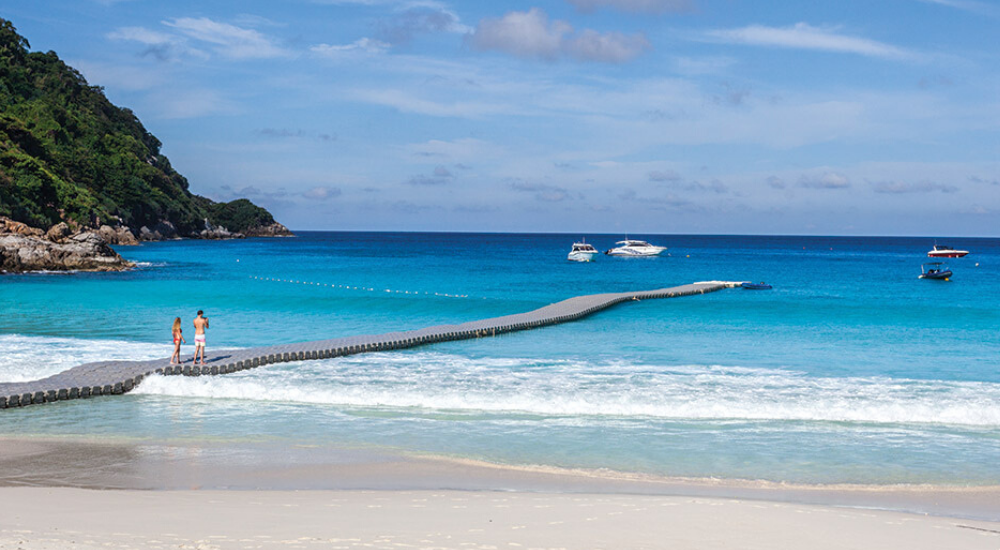 Do you have any programmes for giving back to the community at The Racha?

We have many ways of giving back to the community. We put in place an environmentally friendly pontoon jetty that the public can use free of charge. The local community are able to use our resort clinic. We’ve built public toilets for the many day-trip visitors to the island. We built shops which we lease to the locals at reduced rates to operate shops and food outlets to serve our guests and day trip visitors. And wherever possible, we provide employment to the local people living on the island.

How do you ensure supply of goods and electricity etc. to the island?

The Racha’s Hydroponic Farm provides guests with the freshest, nutrient-rich and pesticide-free produce.

As regards electricity – we generate our own using large diesel power plants. In 2016, we installed a large 250 KWp Solar Diesel Hybrid system that can provide up to 50% of the resort’s day-time peak energy load and reduces our fuel consumption and carbon dioxide emissions by approximately 24% or 1,500 Kg per day.

Please contact us for more infomation about The Racha.